The total Biomass on Earth is 560 billion tonnes of carbon [see ref] most of which is in the form of plant life. If we now calculate the mass of carbon atoms held in the atmosphere in the form of CO2 for a concentration of 280 ppm then we find there is  600 billion tonnes  [see ref using 280 ppm] . These two are almost identical which in my opinion cannot be a coincidence. It seems that nature balances the CO2 levels in the atmosphere so as to match the carbon content  in the Biosphere (and vice versa). During Ice Ages the spread of ice sheets reduces the available land biosphere and as a  consequent CO2 levels fall. These then recover during an interglacial. Over the very long term plate tectonics ensures that any buried carbon by rock weathering is recycled through volcanoes.

During the early Carboniferous period the continents were joined together in one large continent  (Pangea) and the climate was much warmer and humid with CO2 levels reaching 1500 ppm and higher levels of oxygen than today. Therefore if we assume the same relationship holds, then there must have been about four times more biomass compared today in order to “balance” the 1500 ppm in the atmosphere. During the Carboniferous period the world’s coal reserves were buried in inland swamps. This  carbon loss from the biosphere therefore led to a gradual reduction of atmospheric CO2,  eventually leading towards current levels and a cooler dryer climate ending coal deposits. 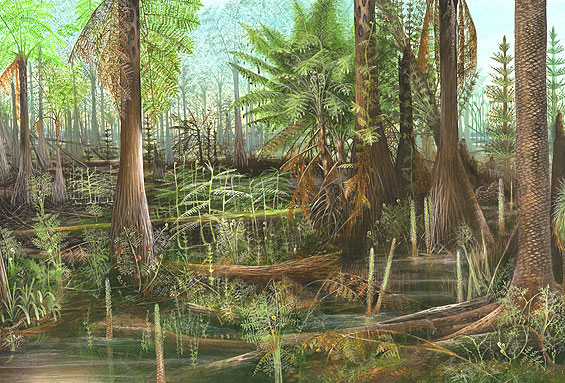 Currently atmospheric CO2 levels are out of balance with the earth’s biomass. This is firstly because we have burned some of the buried Carboniferous carbon (coal) and secondly because we have also curtailed the natural biomass to meet our farming needs.  The carbon deficit seems therefore to be as follows.

Reforestation would probably be the quickest route to begin rebalancing carbon. Burning biomass as a renewable energy source looks like a bad idea as it goes in the opposite direction. Much of Africa also still relies on wood  and charcoal for cooking.

Eliminating the burning of fossil fuels means finding an alternative energy source. The problem with most traditional renewable energy sources is that they are weather dependent and are often out of phase with energy demand. It is mainly  Hydro , Geothermal and Tidal power that are reliable and predictable sources. Furthermore if we want to electrify transport and heating then demand will more than double. That means eventually reaching a grid capacity of ~ 80 GW.

Only Nuclear power can realistically achieve this goal, perhaps eventually through Nuclear Fusion. We then hopefully will be able to rebalance global carbon.