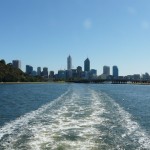 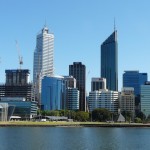 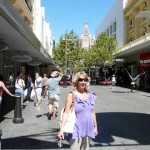 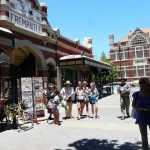 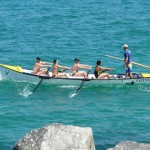 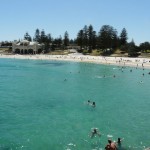 We arrived in Perth on Thursday so today is our second full day in the city. It is a beautiful city with an attractive pedestrian shopping area adjoining the business part next to the Swan River estuary. Yesterday we took the boat down the river to Fremantle which shows the great situation of the city inland from the sea but still within easy reach. All along the river are beautiful waterfront houses with marinas full of expensive yachts and motor cruisers. Looks like a lot of people are getting rich in Perth. One of the houses was massive and I overheard a remark that it was recently sold for 56 million dollars – the most expensive house in Western Australia. The whole city seems affluent and the prices are higher than elsewhere – about a third higher than Adelaide. You can easily pay up to 10 dollars for a pint of beer which hasn’t stopped me buying beer yet !

Fremantle is a small town with a long maritime history. The buildings are often  stone brick type town houses which gives the place an English seaside town type of appearance.  We went back on the train and discovered that Perth has a good rail link service. Today we took the train to Cottersloe to go to the beach which has lovely white sand and clean water. There are endless beaches like this up the coast many with no-one on them.

Perth and Western Australia have got rich on minerals and mining. It is the third largest gold producer in the world and there is Zinc, Iron Ore, Uranium coal and natural gas. This probably explains why the city seems so affluent with parks and expensive suburbs. We even saw 2 Ferraris today in Cottesloe so despite the socialist government someone is getting rich. The natural environment and quality of life in Perth are probably among the best in the world. 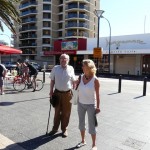 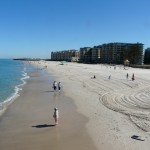 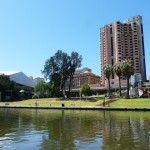 Before arriving in Perth we spent a couple of nights again in Grenelg, Adelaide’s  seaside town. It was here that the first british settlers arrived in Western Australia around 1830. Today it is the day out at the beach spot for young people arriving on the Tram. Our swimming was tempered by the news that sharks had been seen just off the coast recently ! We took a boat ride down the river to Adelaide Zoo. The river becomes a lake in the centre of Adelaide making the town very pleasant. The queues for the famous Panda were too long for us to wait I have to admit.

This entry was posted in Australia. Bookmark the permalink.