Yesterday I spent the day at the Royal Society in London attending a meeting on Physics at the LHC (Large Hadron Collider), CERN. It is fantastic that the Royal Society organised an open meeting like this and I was very pleased to be able to attend because it is now 30 years since I used to work at CERN and Rutherford Lab myself. What has changed ?   Strangely enough the physics is still almost exactly the same as it was 30 years ago when the “standard model” was defined. Since then there have been many  experiments all confirming its predictions and the Top quark (missing in 1980) has been discovered experimentally. The one prediction of the standard model that has not been observed is the Higgs boson. LHC is designed to find it, although it has not yet been seen in the first low luminosity runs. The machine is now working perfectly and high luminosity runs are taking place until June. Therefore withing 9 months or so we should know if the Higgs really exists or not. There are several constraints which put limits on its mass and the most likely mass is around 150 Gev. However the standard model is likely  wrong because  it describes nature as it appears  rather than explaining  why nature is the way it is. All the great advances in the past such as  relativity and quantum mechanics arose from  new insights to explain contradictory data from experiments.

There is now  real excitment that this machine will discover new insights to the universe, and this could be far more important than confirming the Higgs. What is the Dark Matter which  permiates galaxies and hold them together? Are there new underlying symmetries of the universe which unite matter with energy (forces) ? Why does matter dominate anti-matter in the universe? There is a real anticipation that after 25 years we are on the verge of a breakthrough. Experimental high energy physics has almost hit a limit in that particle accelerators have become so expensive that maybe LHC will be the last leap forward. Many physicists and PHd students have also had to endure a long desert of experiments. The big  experiments on LHC each have some 800 collaborators from all over the world participate . Despite this with data flowing – it is still possible for just one PhD  student working through the night  to make that one discovery which can change how we view the world. Physics is addictive.

The standard model of particle physics describes the 3 families of quarks and leptons. Experiments have shown that there are no more “flavours” of quarks. The 3 forces Strong, Weak and Electromagnetic are described by “gauge” theories mediated by force particles – bosons. 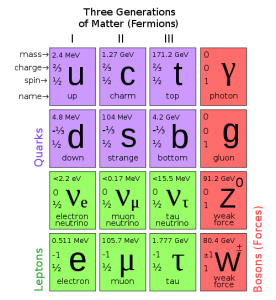 The two huge detectors are called ATLAS and CMS. Their design and construction equals any scientific endeavour to date. They are both working to perfectly, to budget  and to spec which is a tribute to the dedication of the scientists involved. The particle collision events they need to measure at these energies are the most complex imaginable. Each detector is divided into 4 parts: 1) a magnetic solenoid detector to measure momentum/energy of charged particles. 2) An electromagnetic calorimeter to measure energies and trajectories of electrons and photons 3) A hadron calorimeter to measure the energy and trajectory of jets of hadrons (including neutrons) arising from quark scatering 4) Muon detectors wich pick up the more penetrating heavy electrons (muons) which pass through the other detectors and trigger the external drift/wire chambers . There is actually a fifth detector – missing energy. Neutrinos pass through all detectors and their only trace is missing energy from the sum of all other particles. It is even possible to reconstruct the 4-vectors of single neutrinos this way.

High Energy Physics is becoming exciting again and the next couple of years will be a renaissance as results come forth from CERN. I was also amazed to discover that the last launch of the shuttle Endeavor will place in orbit a particle detector also built at CERN but pioneered by Sam Ting. This detector will pick up pure cosmic rays from in space and could independently discover the origin of Dark Matter and Dark Energy. Sam Ting won the Nobel prize for discovering J/Psi particle (charm quark) and is a maverick. Maybe he will do it again. The launch is scheduled for today 16th May !