I rather suspect that climate scientists have consciously or sub-consciously tended to exaggerate future scenarios in order to boost AGW in the public consciousness as the biggest single threat to mankind. On balance, it now seems far more likely that human activity will cause only moderate warming this century. Why do I say this ?

I have been running GISS GCM model II based on pre-defined scenarios ( EdCM). This software is intended to be used in universities as an educational tool for students to learn about GCMs and climate change. This was also one of the leading models used in IPCC in pre-2000 reports. It made widely quoted predictions (see also that recently by the IEA) showing that temperatures will rise by 5-6 degrees by 2100 unless we drastically curb CO2 emissions (as if that were even currently possible). The EdGCM scenario which predicts such warming is called global-warming01. I have not changed anything in the model itself but have duplicated the “Global Warming” scenario adjusting the future CO2 trends and using a more accurate TSI value. The GISS model is known to have a built in strong positive feedback from water vapor and cloud cover. Cloud feedback is found to be ~0.85 W/m2K, and total feedbacks including water vapor and snow/ice is about 2.6 W/m2K. giving a climate sensitivity of 4.2 deg.C.

The packaged CO2 emission profile predicts san exponential growth (compound 1% increase) from 2000 onwards. The TSI value is based on the older measurements of 1366 w/M2 whereas I am using the latest SORCE TIM value of 1360.8 w/m2. For comparison to the standard Global Warming scenario, I have made 2 runs with linear increasing CO2 levels . Figure 1 compares all 3 model CO2 curves overlaid with the actual measured values from Mauna Loa. 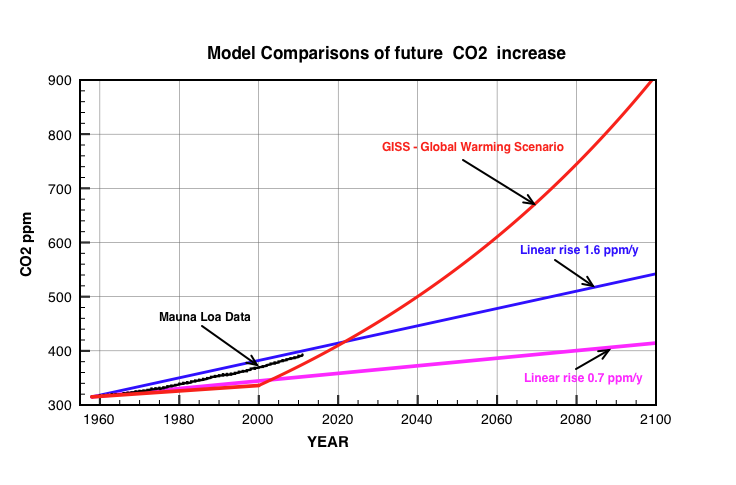 A full run for each of the linear CO2 trends was made from 1958 to 2100 and the resulting time dependence of the global surface temperatures compared. First we look at the standard result for the exponential CO2 growth. 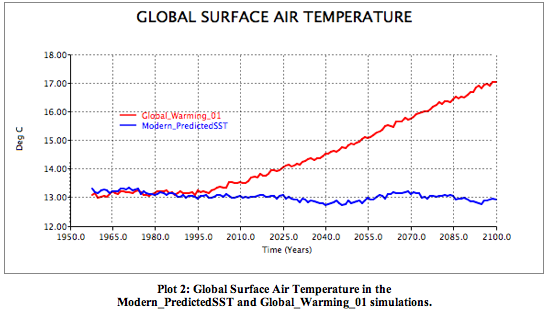 Fig 2: The standard Warming model with exponential increase in CO2 levels resulting in 5 degree warming by 2100. In blue is a stationary CO2 level fixed at 1958 levels.

Figure 2 shows the results from the global warming model provided by University of Columbia and GISS. This is the model used for educational purposes and results in a net warming of 5 degrees by the end of the century. This is the widely quoted warming you hear most often. Now we look at the linear results with correct TSI values. Figure 3 shows the more modest (and realitistc ?) results for the linear increases plotted on the same scale as for the exponential growth. 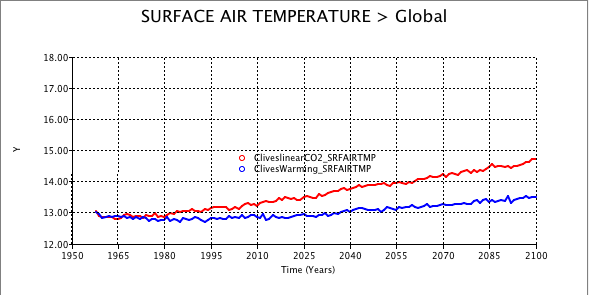 Now lets compare all this to the real temperature data as measured by HADCRUT3. Figure 4 shows a comparison of the 3 temperature trends with the measured global surface data assuming T(1958) as 13 deg.C. We already see that the apparent actual warming post 2000 is well below the extreme case. In fact the trend is even slightly below the simple linear CO2 increase of 1.6 ppm/y. 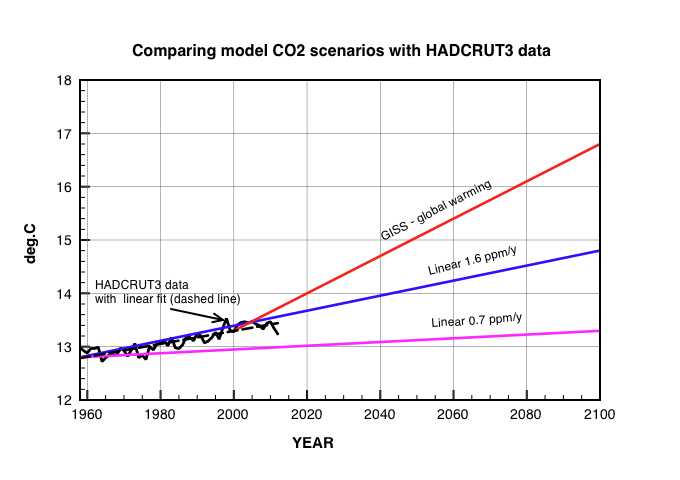 Fig 4: Comparisons of the 3 model runs with actual temperature measurements (HADCRUT3). The dashed line is a linear fit to the data from 1958 to 2012 giving an annual rise of 0.012 deg.C

There are many uncertainties in model simulations especially concerning feedbacks. The more extreme predictions of AGW are already looking rather unlikely. This is mainly due to overestimating feedbacks which in the case of clouds could even turn out to be negative. However here we are just comparing different CO2 scenarios and a corrected TSI value. One gets the impression that steep CO2 trends were chosen to accentuate warming for a bigger impact. It now turns out that the data do not support such accelerating CO2 trends in a high feedback model. This means that mankind has at least 50 years to develop realistic alternatives to fossil fuels. Given sufficient willpower and investment, Nuclear Fusion, Thorium reactors, and new generation conventional reactors are all known safe alternatives. Covering the countryside with wind farms is mainly political posturing, has no hope of meeting more than 10-20% of our energy demands, and will leave an ugly legacy for future generations to clear up.