Winter 2013/14 has been characterized  by strong westerly  gales. The UK has invested heavily in new wind farms resulting in a total fleet of 10GW of installed capacity from over 5000 turbines. Such windy conditions are favorable to higher load capacity. Wind also takes priority over other fuels on the grid.  So how has our fleet of wind farms fared this winter ? 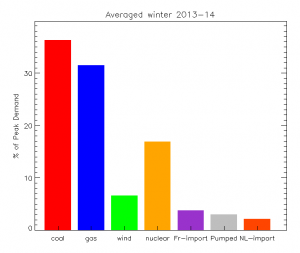 I have been monitoring the national grid statistics for electricity generation every hour from late September 2013. Demand for electricity must be met by supply in real time, so what really matters is the daily peak load on the grid. If demand cannot be met at peak demand then blackouts will occur. For each day over the last 7 months I have calculated the time of peak electricity demand and which fuels were used on the grid to provide the power demand. On average wind provided 6.6% of peak demand.

However, when we look in detail at the daily fluctuations in wind we see a different story to that usually reported by the industry and the media. It is true that wind power records have been  broken this winter during extended windy periods. As a result wind power has occasionally reached up to 14% of UK total demand. What is never reported though is that on other days there has essentially been zero wind power available at peak demand. This fact remains the real show stopper for wind power if we aim  to maintain a modern technological society.

This is the unsolved problem with wind power. Without any energy storage solution, wind cannot displace any fossil fuel plants because they are still needed in order to balance the grid. Wind energy produced at night is really paid for by consumers at double peak time rates but is then thrown away. This is the real scandal. Nuclear on the other hand has an inverse problem. Nuclear Power is a continuous process which is  on both night and day. This means that nuclear cannot  be used to balance wind. That is why all motorways have street lighting all night in Belgium, because it costs nothing since  their nuclear energy is essentially free at night. The difference with wind is that nuclear is 100% reliable and we can plan to do something with that power. This makes nuclear a far more important energy source.

Now we look in more detail at the demand and supply this winter. The next graph covers the period from September to March. The fuels used to generate peak electricity are plotted for each day. Wind has priority in that all available power is fed to the grid ahead of other fuels apart from nuclear. The fuel labelled “imported and pumped” is the sum of hydro power and and imported energy from France and Holland via the interconnection links. This winter it has been a one way traffic from them to us. France relies on Nuclear while Holland is building more coal power stations. 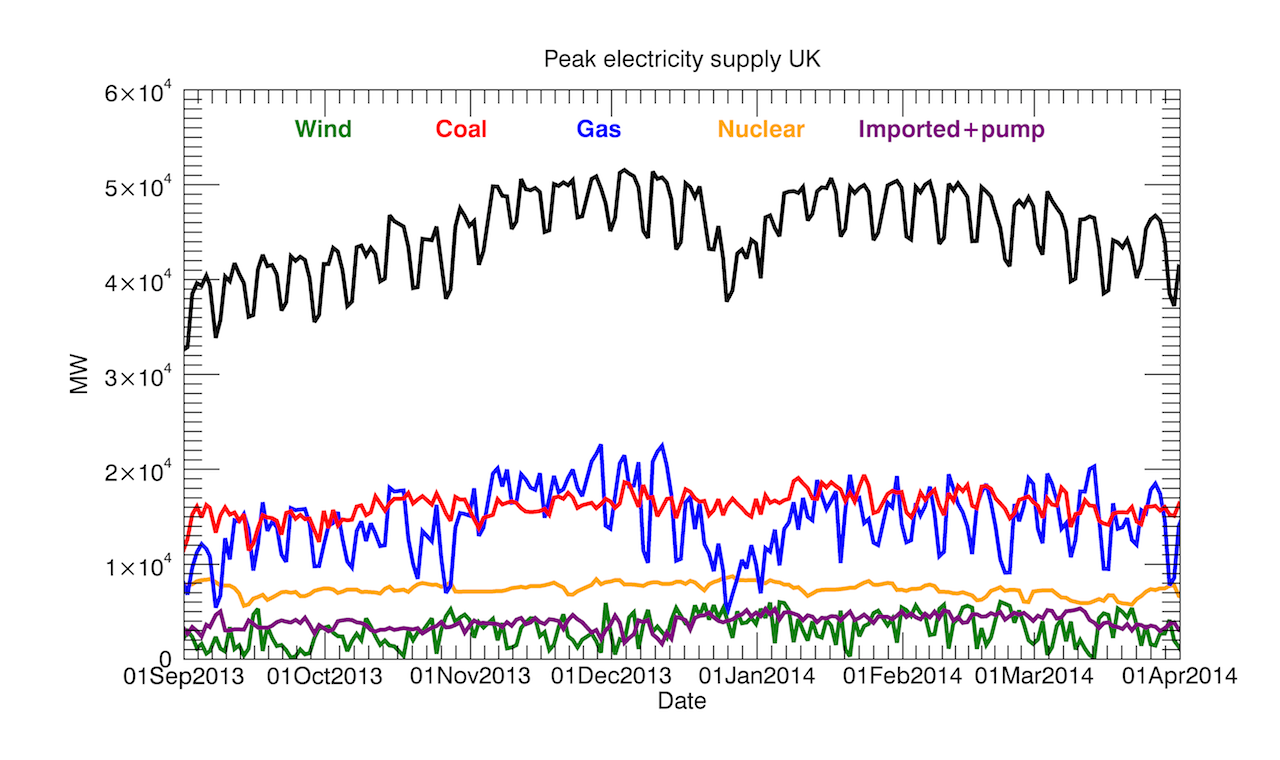 The seven day oscillation is of course the variation between weekdays and weekends. Now we look in more detail at the high daily demand period of about 50GW during December and January with a noticeable strong dip over the Christmas break. The next plot is a daily additive stacked bar graph.

It is interesting to note  how the time of day for peak demand changes on Christmas day to lunchtime, whereas normally the peak demand always occurs around 5pm. Presumably this is simply because everyone is indoors cooking Christmas lunch.

Detailed breakdown of Fuel sources for the Christmas period. During this period the UK experienced some severe winter storms and flooding.

There is no doubt that wind energy does make a noticeable contribution to the grid – but one has to ask at what cost and what benefit ? Wind has increased roughly 2% compared to  last winter but on the other hand we are now spending  £6 billion per year in subsidies. The subsidies can only increase with future expansion, similar to those in Germany where annual energy prices are on average costing each household an extra €300 in subsidies. Doubling the number of turbines in the UK would increase the average yield to 12% of peak load, but would still do nothing to improve energy security. That is because sometimes there would still be < 1% of wind energy available at 5pm on the coldest day of the year, so not a single conventional plant could close without the risk of blackouts increasing.

Independent of energy security, there are also serious environmental objections to a massive extension of wind farms in and around our small island.  They are destroying some ancient peat and moorlands. They are ruining some of our best countryside  and seascape views. Meanwhile the renewables lobby are pushing for ever more wind farms partly because they are risk free investments underwritten at our expense.  The only low carbon strategy that makes any sense today  is a rapid expansion of nuclear power, certainly not wind power. Economies of scale say we should instead be building 5 identical Hinkley Point C type stations all in parallel, thereby bringing on line 15GW of new reliable energy  by 2020. Furthermore we could then also recharge everyone’s electric car overnight and light all our motorways for free!  DECC chief scientist David Mackay has suggested instead using future electric car batteries to power the grid when there is no wind . Imagine waking up for work some mornings to find that your car battery is dead after a becalmed night! I somehow expect government cars will be exempted !

Relying on wind energy  is like choosing to sail round the world rather than take the QE2. Sailing is great fun but the journey time is out of your control. You can be becalmed for days on end or be hit by a storm at 3am when you need to sleep.  I am amazed that seemingly intelligent people can be so deluded about “green”  energy. It really is as much a scam to defraud tax payers, than it is a remedy for climate change!