The cause of the increase in  recent temperature anomalies in CRUTEM4 as compared to CRUTEM3  is as follows: 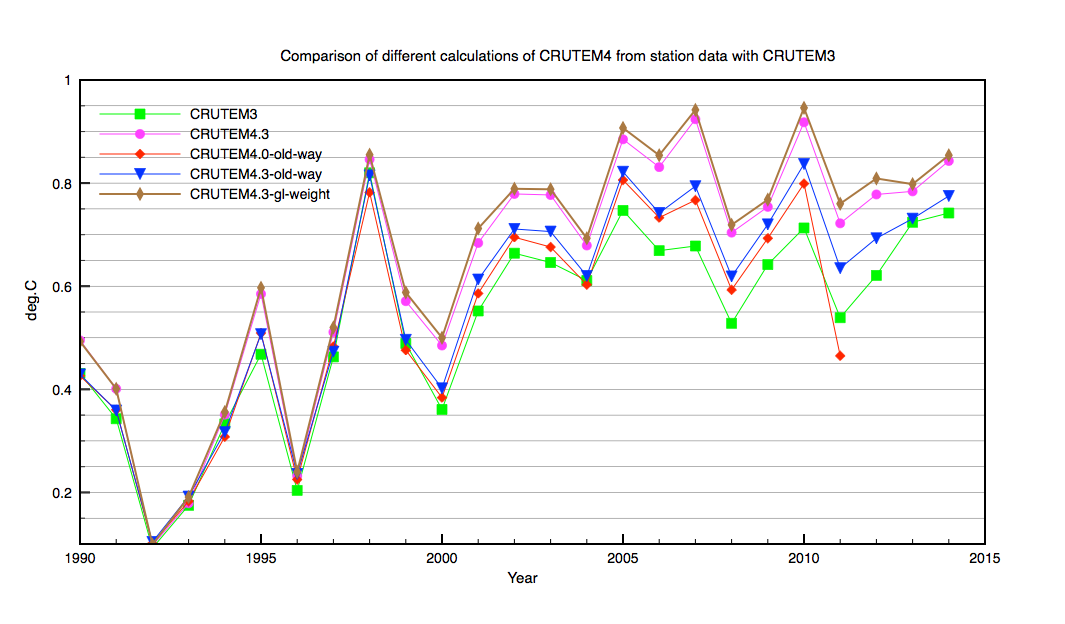 Differences between CRUTEM3, CRUTEM4 and different global averaging methodologies. All results are calculated directly from the relevant station data.

This change alone explains most of the apparent temperature increase post 1998 between CRUTEM3 and the latest CRUTEM4.3. I only discovered this during a twitter exchange with Tim Osborne from CRU, after I was unable to reproduce C4 station results using C3 methodology. In addition over 600 new stations at high northern latitudes were added in CRUTEM4. Their warming effect was also boosted using the new methodology by 30% compared to CRUTEM3 (First look at CRUTEM4).  Jones(2012) writes

The inclusion of much additional data from the Arctic (particularly the Russian Arctic) has led to estimates for the Northern Hemisphere (NH) being warmer by about 0.1°C for the years since 2001.

CRUTEM4.3 further continued this warming trend by adding yet more arctic stations and some data homogenisation ( like GHCN V3 ).

I am not saying it is unreasonable to use a 2:1 weighting for the Northern Hemisphere because there is about twice as much land compared to the Southern Hemisphere. In fact I calculated a  global value ignoring hemispheres completely. This is shown above as CRUTEM4.3-gl-weight which agrees with the new 2:1 weighting. However this fundamental difference should be more widely known.  There has also been a tendency  to remove stations in the SH while adding far more stations  in the NH. The SH still has poor coverage,  especially in Antarctica.