The figure below shows all the major land temperature (anomaly) series overlayed. There are still some slight differences in normalization. Berkeley use individual station baselines, GISS use stations normals in 1951-1980 and CRU 1961-1990. NCDC uses normals relative to the full 20th century shifting values up about 0.15C higher and for that reason is not included below.The V3C offsets are my invention and use station offsets to grid average temperatures with normals in 1961-1990.  The core set of station data for all groups are mostly based on those in GHCN  V3.

Main temperature series compared. The curves are FFT smoothed fits to each dataset. The grey band is the average of all these individual  curves and represents some ‘universal trend’.

We then smooth each dataset based on an 4-year wavelength FFT filter. These are the dashed curves. Finally we average all these together to give one ‘universal’ trend shown as the grey curve.  The result is a net 0.8C rise since 1950 over land surfaces

Now we take that Land trend curve ‘L’ and combine it with Ocean temperature data HadSST2 as follows. First, I use the same FFT smooth on HadSST2 to give an Ocean  trend ‘O’. Then define a global trend ‘G’ based on the fractions of the earth’s surface covered.

Now we simply plot G and compare it to the latest annual Hadcrut4 data. 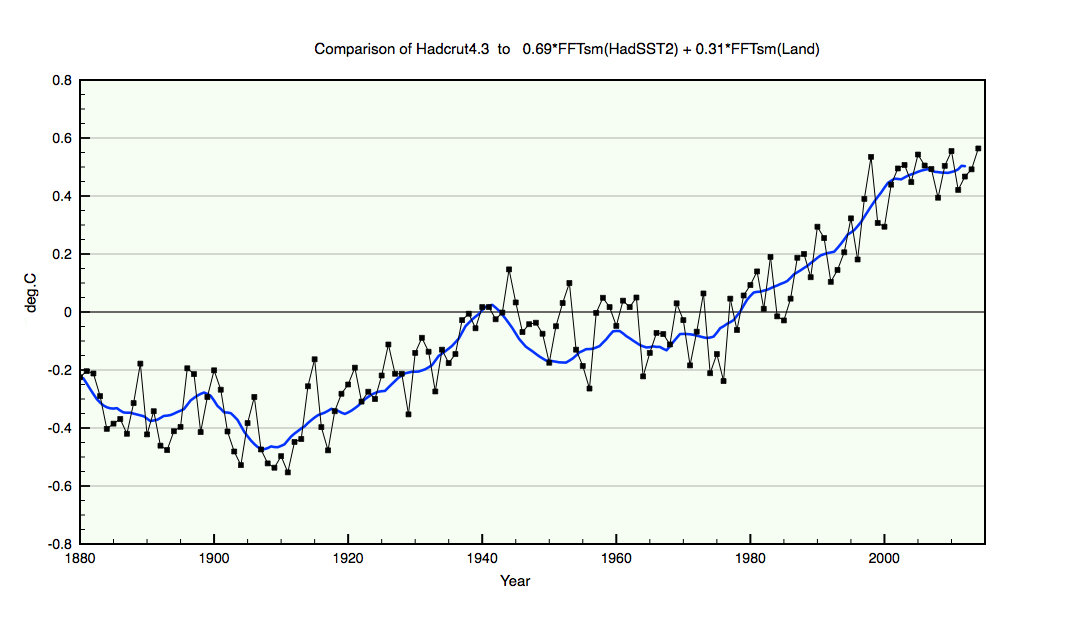 It is an almost perfect fit. This at least demonstrates an overall  consistency between the ocean, land and combined surface data. The different algorithms applied  are now all basically in agreement.

What’s left is looking into any systematic biases hidden in the more than 7200 individual station data. These could be caused both for instance by  ‘homogenisation’ and the urban heating effect. That is if I can still find  the energy to delve into it !