Is the warm period in the Mid Pliocene analogous to today’s warming climate? If so can we use it to infer future temperature rise? This is what Wikipedia says:

The mid Pliocene warm period is considered a potential analog of future climate. The intensity of the sunlight reaching the earth, the global geography, and carbon dioxide concentrations were similar to present. Furthermore, many mid-Pliocene species are extant helping paleotemperature proxies calibration. Model simulations of mid-Pliocene climate produce warmer conditions at middle and high latitudes, as much as 10–20 °C warmer than today above 70°N. They also indicate little temperature variation in the tropics. Model-based biomes are generally consistent with Pliocene paleobotanical data indicating a northward shift of the Tundra and Taiga and an expansion of Savanna and warm-temperate forest in Africa and Australia.

Carbon dioxide concentration during the mid Pliocene has been estimated at around 400 ppmv from 13C/12C ratio in organic marine matter[12] and stomatal density of fossilized leaves,[13] decreasing carbon dioxide levels during late Pliocene may have contributed substantially to global cooling and the onset of northern hemisphere glaciation.[10]

Interestingly though the subject is only mentioned once in the IPCC AR5 report concerning Sea Levels (5.6.1), which is surprising if the above statements are true.   Here is their Benthic Foram proxy data on which the warm period is based. 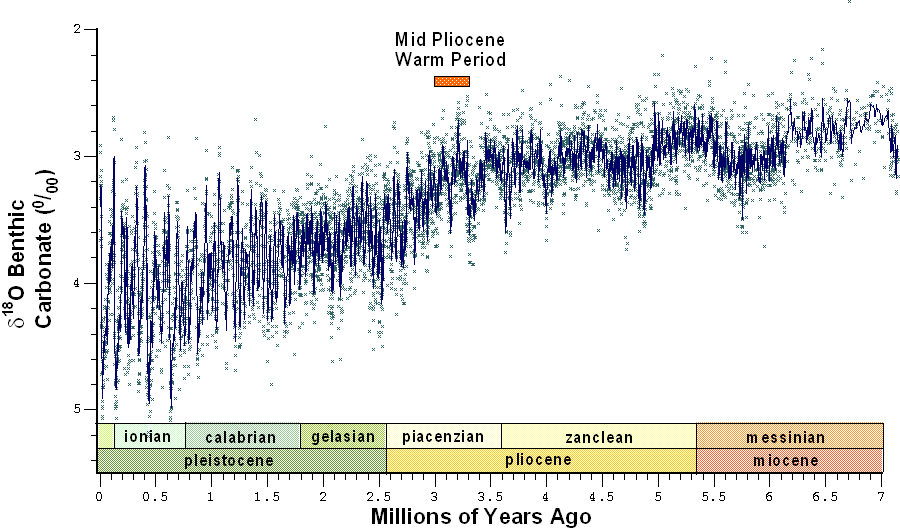 As you can see what they define as the warm period is centred  at 3.2 million years ago. So was the sunlight intensity really the same as today? I have used the Laskar astronomic ephemeris to calculate seasonal insolation at 65N back to 5 million years ago. This is what I get.

Daily insolation at 65N for different months over 6 million years.

There is an exact match to current orbital conditions 2.8 million years ago but not 3.2 million years ago. The Mid Pliocene ‘warm’ period corresponds to an era of high eccentricity more like that during the Eemian which was warmer than the holocene despite slightly lower CO2 levels.

Therefore I do not think the claim that the Mid Pliocene warm period tells us very about future warming  is valid. I also think it is hard to justify that it was really that much warmer than earlier times either. Here is my plot of the LRO4 stack. 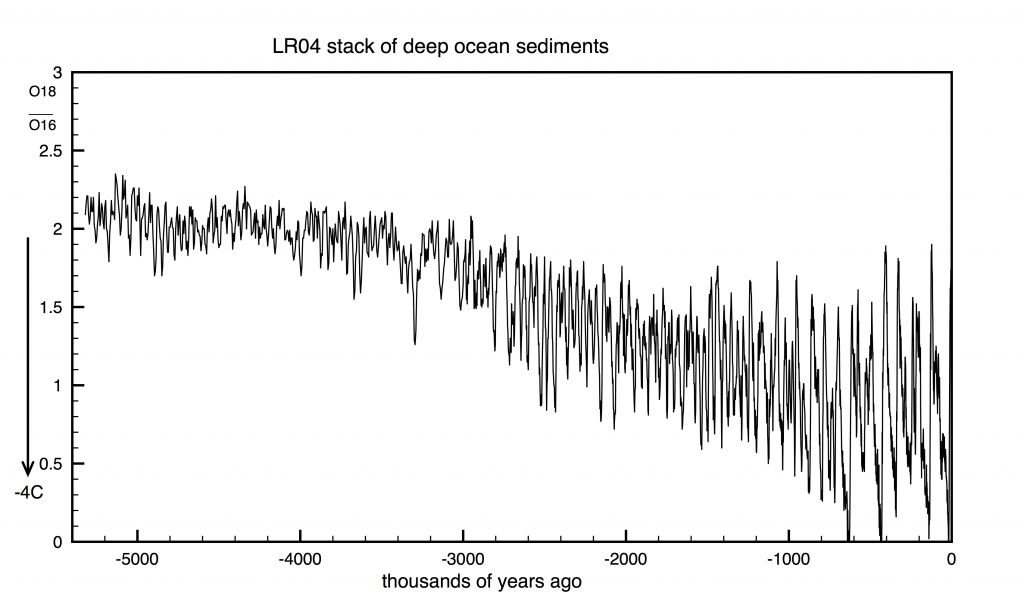 I doubt whether you could claim a clear Mid Pliocene warm signal here. This may be why it doesn’t feature in AR5.