I have the raw measurement data for all 112 stations used by ACORN-SAT.  So I processed the daily minimum and maximum temperatures in exactly the same way as for the homogenised data. Here is the result. 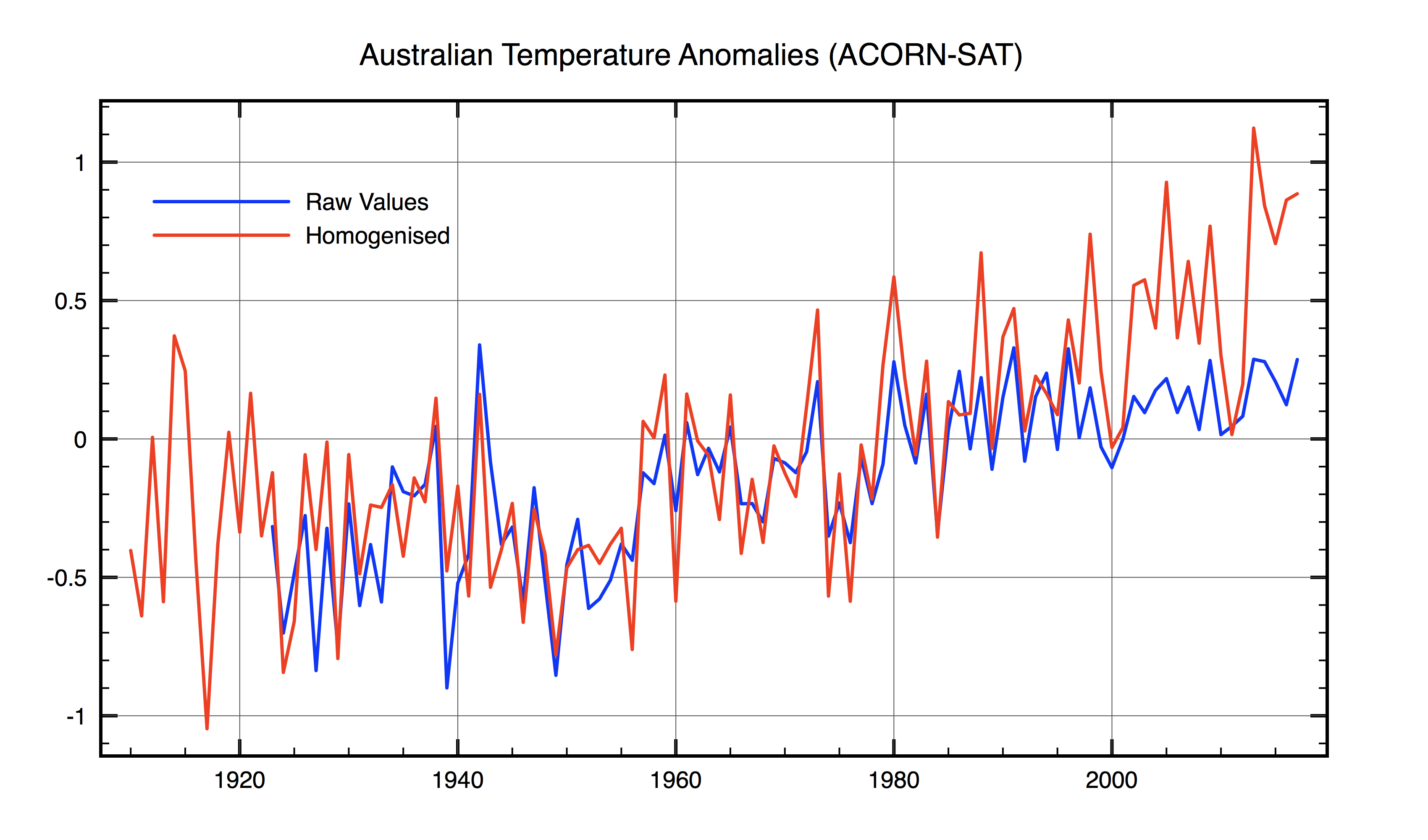 The raw result shows no warming after ~1990. The apparent warming of ACORN-SAT by ~1C is therefore a result of the homogenisation process.  How can that be?

Several ACORN stations are not autonomous but instead are merges of nearby stations. For example Launceston Airport is a merging of the current station, a previous airport location and one in the centre of town. Choices of how to align such offsets between different locations are called homogenisation. Launceston is rejected from the raw Anomaly calculations simply because the current airport site has no coverage between 1961-1990.

Homogenisation consists in looking either manually or statistically for kinks or offsets in temperature data, and then correcting for  them. These can be caused by recorded site moves, instrumentation changes or often for unknown reasons. The corrections are supposed to be determined by near neighbours which in Australia may be 100s of km away. Automated changes are designed to make signals smoother, but this results in a tendency to force all stations to end up following the same trend. That is what homogenisation means. Often these adjustments are based on differences in derived monthly anomalies, which after homogenisation then get converted back into ‘measured’ temperatures. This all seems rather incestuous to me, so I took decided to take a deeper look.

This is Richmond, Queensland which shows no shift in raw temperature anomalies, yet it gets subtly modified by homogenisation thereby increasing a small warming trend. 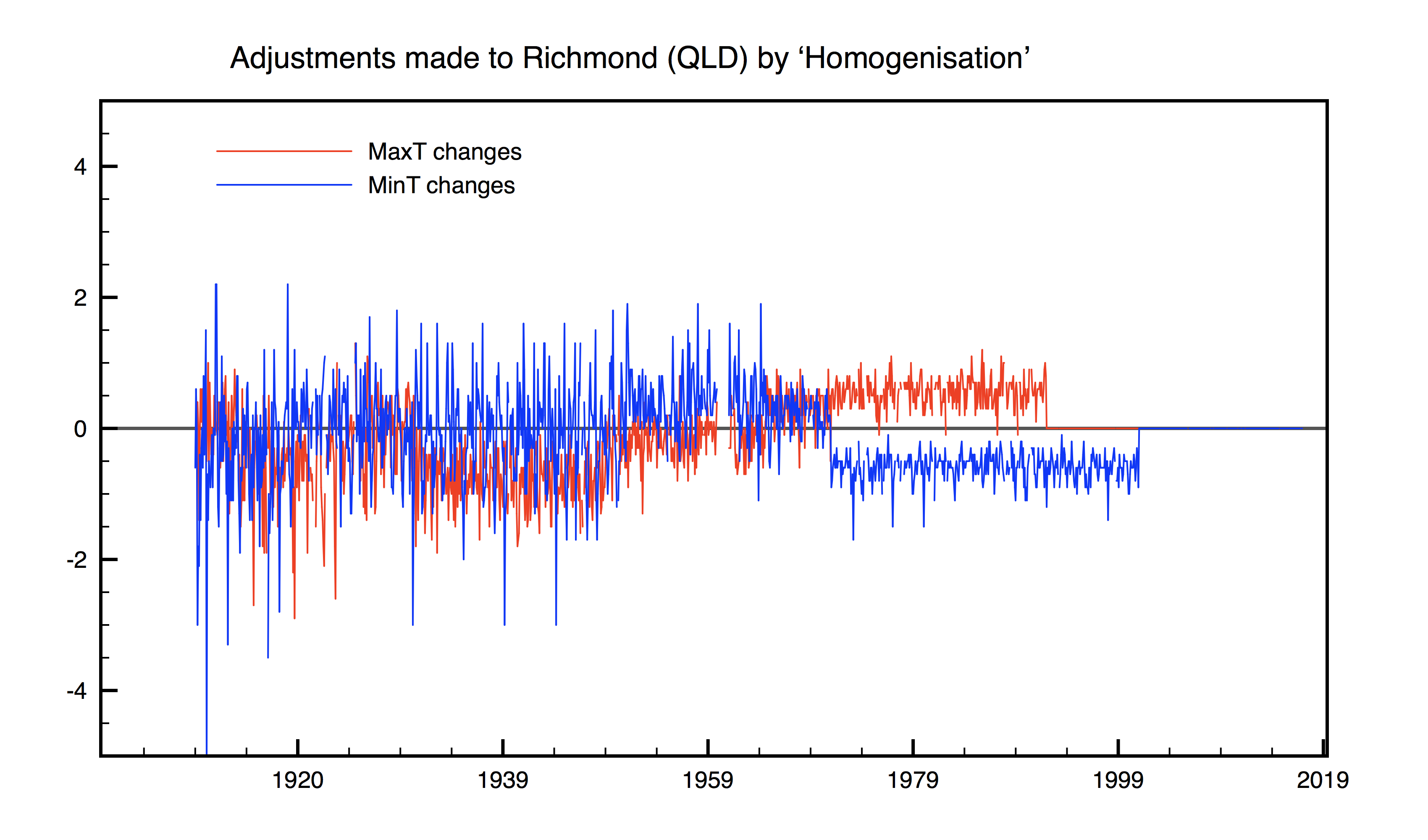 The second example is Wilcania which shows a flat anomaly distribution in the raw data but which after ‘homogenisation’ shows a positive warming rrend. 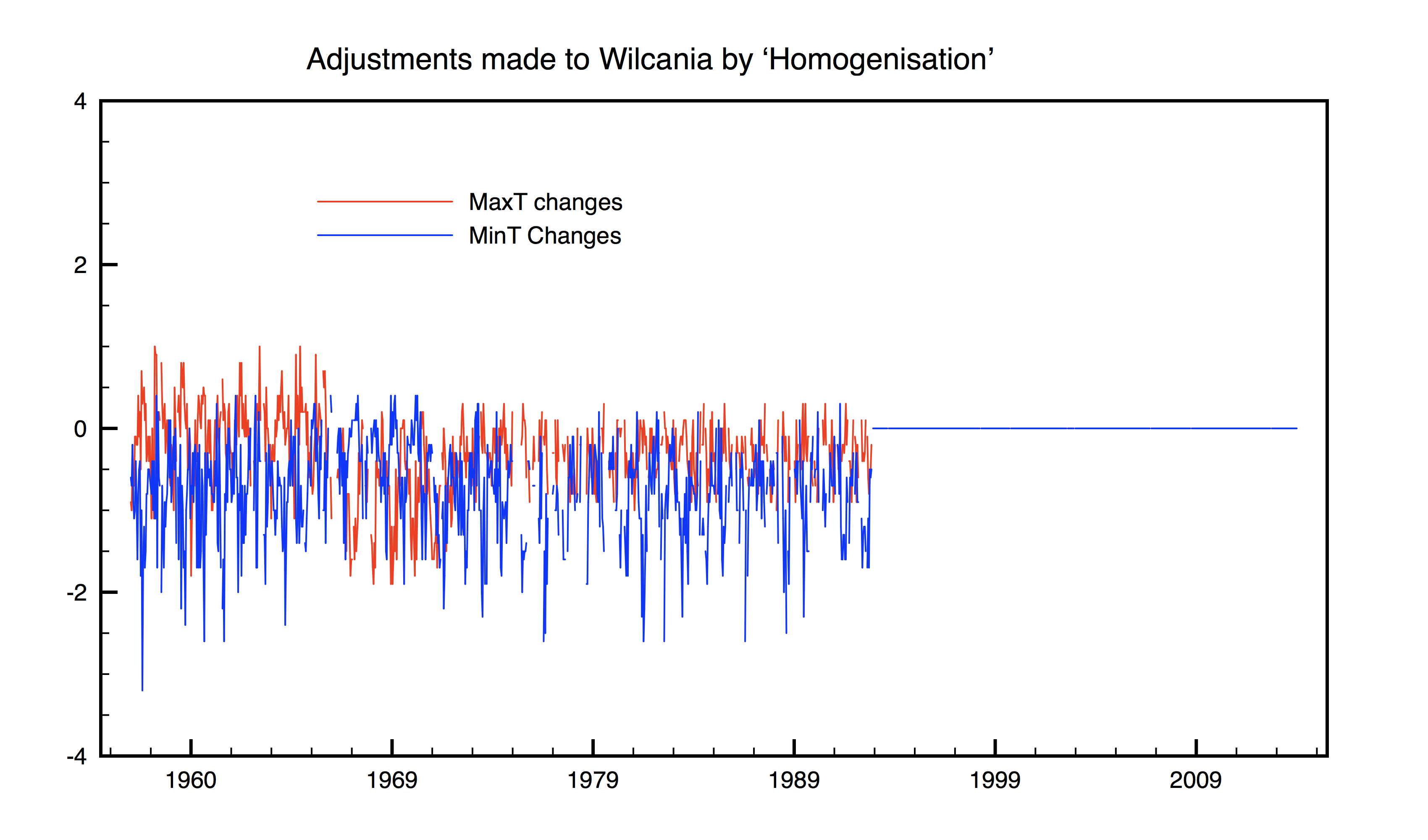 Here is a comparison of the resulting temperature anomalies. The red curve are the annual average anomalies

It is true that several stations indeed show shifts in raw anomalies, mainly due to station re-location, but these should be corrected with a simple offset. The same argument applies in the case that different stations are combined within the same town eg Launceston. However, I now have no doubt that automated ‘pairwise’ algorithms will always exaggerate warming. We see the same bias in GISS, in GHCN, in CRUTEM and especially in Berkeley Earth.

The question is by how much?

9 Responses to Raw data shows no warming in Australia