A recent Met Office press release , which was taken up by the BBC and most national newspapers, claimed the following:

“New innovative research has found that for England and Wales there is a 1 in 3 chance of a new monthly rainfall record in at least one region each winter (Oct-Mar).”

The paper in nature is called ” High risk of unprecedented UK rainfall in the current climate” and is based on model simulations, rather than real measurements of rainfall in regions of UK. Can this really be  true? The result is based on an ensemble of model runs with ~ 400 ppm where regional winter precipitation is generated stochastically, based on some assumed dependence of CO2 levels with temperature and humidity.

To judge these results we first need to understand exactly what 1 in 3 really means. Secondly if such an increased risk really has occurred then should it not already be evident in the data?

So in this post we look at the measured monthly rainfall data. If the above claim is true then we should observe a skewed distribution of monthly record rainfalls towards recent times.

There are 5 regions in England and the rainfall monthly averages  all start in 1873. This means there are 144 completed years to consider up to July 2017.

The paper  defines ‘winter’ to be 6 months (Oct,Nov,Dec,Jan,Feb,Mar). So the random probability of a record year in any month and for any region in 2017 is 21% or roughly 1 in 5 (6*5*0.7). (Richard Allan says the study is actually based on just 4 regions, if so then the random probability is 17% for 4 regions however this does not affect the argument).

The claim is that climate change has increased the probability of a new record in any year to 1 in 3. In other words that the chance has increased by 50%. Now if that is true then it should be possible to check for this in the data itself, because the probability must have been steadily increasing with CO2, or their claim is not supported. It can’t suddenly step up by a factor 2 in 2017.

So lets look at the Met Office’s own data for regional rainfall to see if there is any evidence of an increase in records with time. We take 1960 (based on Hadcrut4) as a marker for the onset of CO2 induced warming. The plots below show the rainfall distributions for each of the 6 months in 5 regions of England. Monthly record rainfalls are highlighted by the circles. 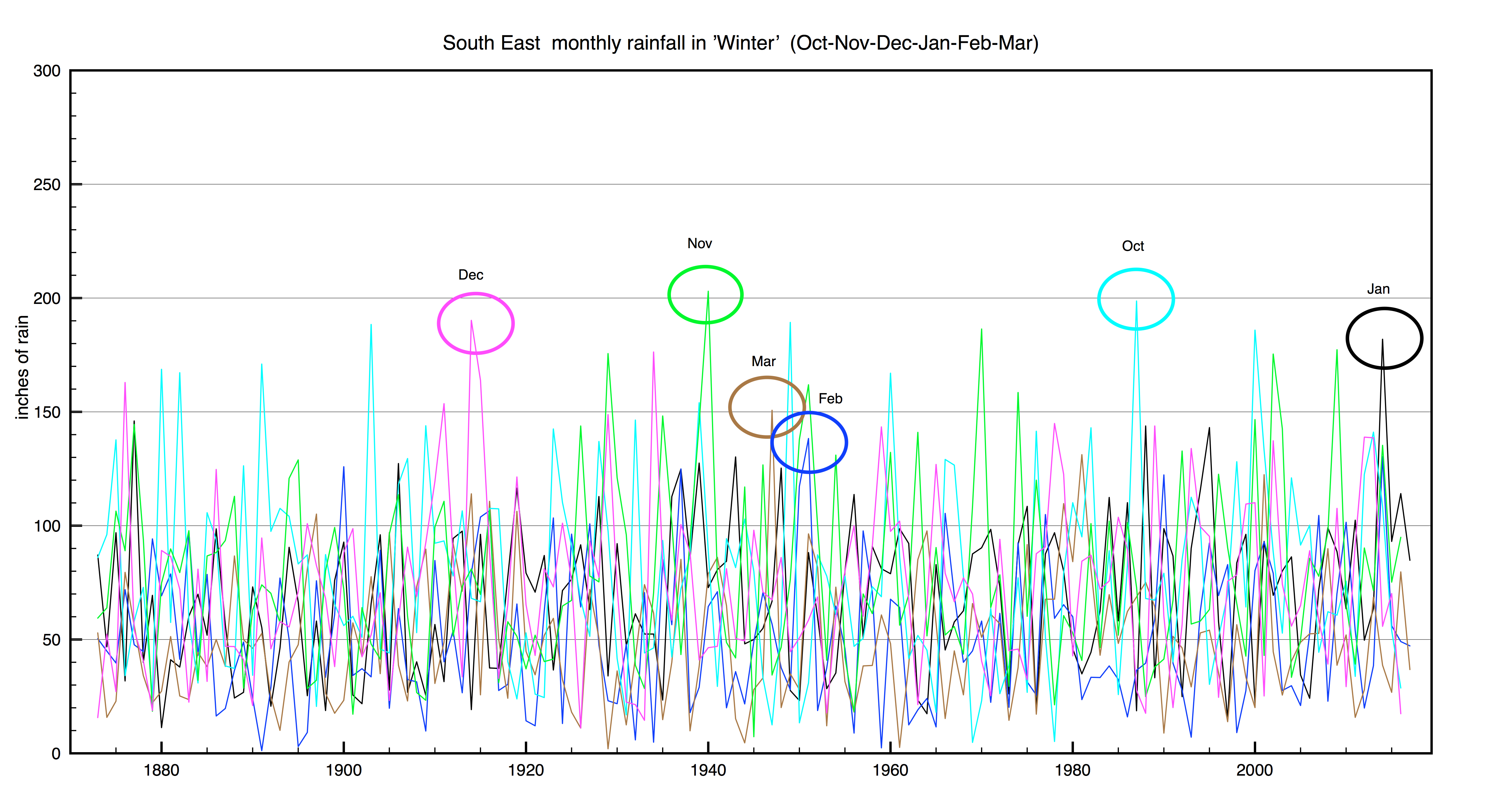 1)Rainfall monthly data for South East England. Monthly record rainfalls for each month  are highlighted. Units are mm of rain ( not inches!)

There is one record occurring after 1960 for South East England (Storm Jan 2014). 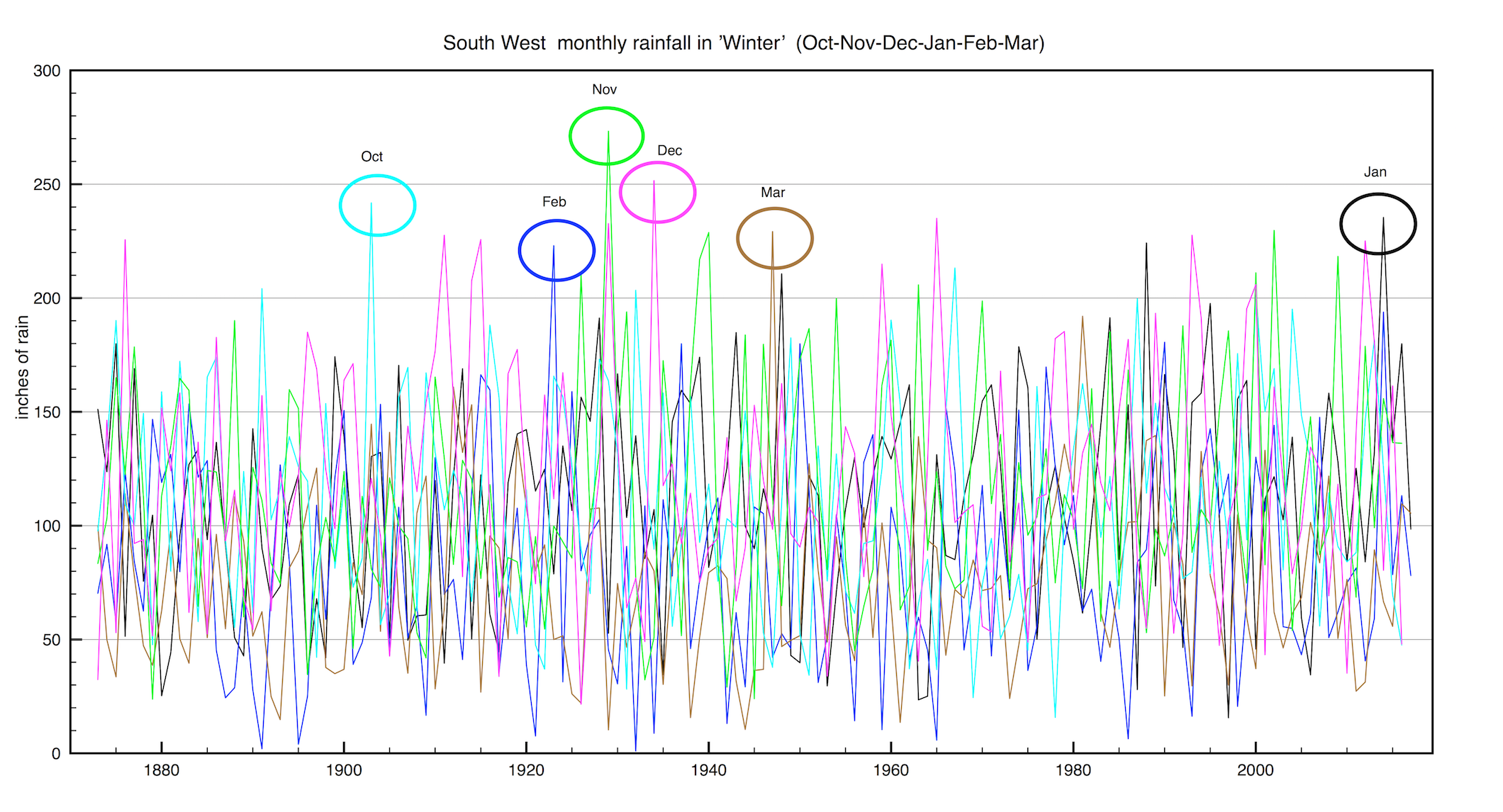 2) South West Region. Units are mm of rain ( not inches!) 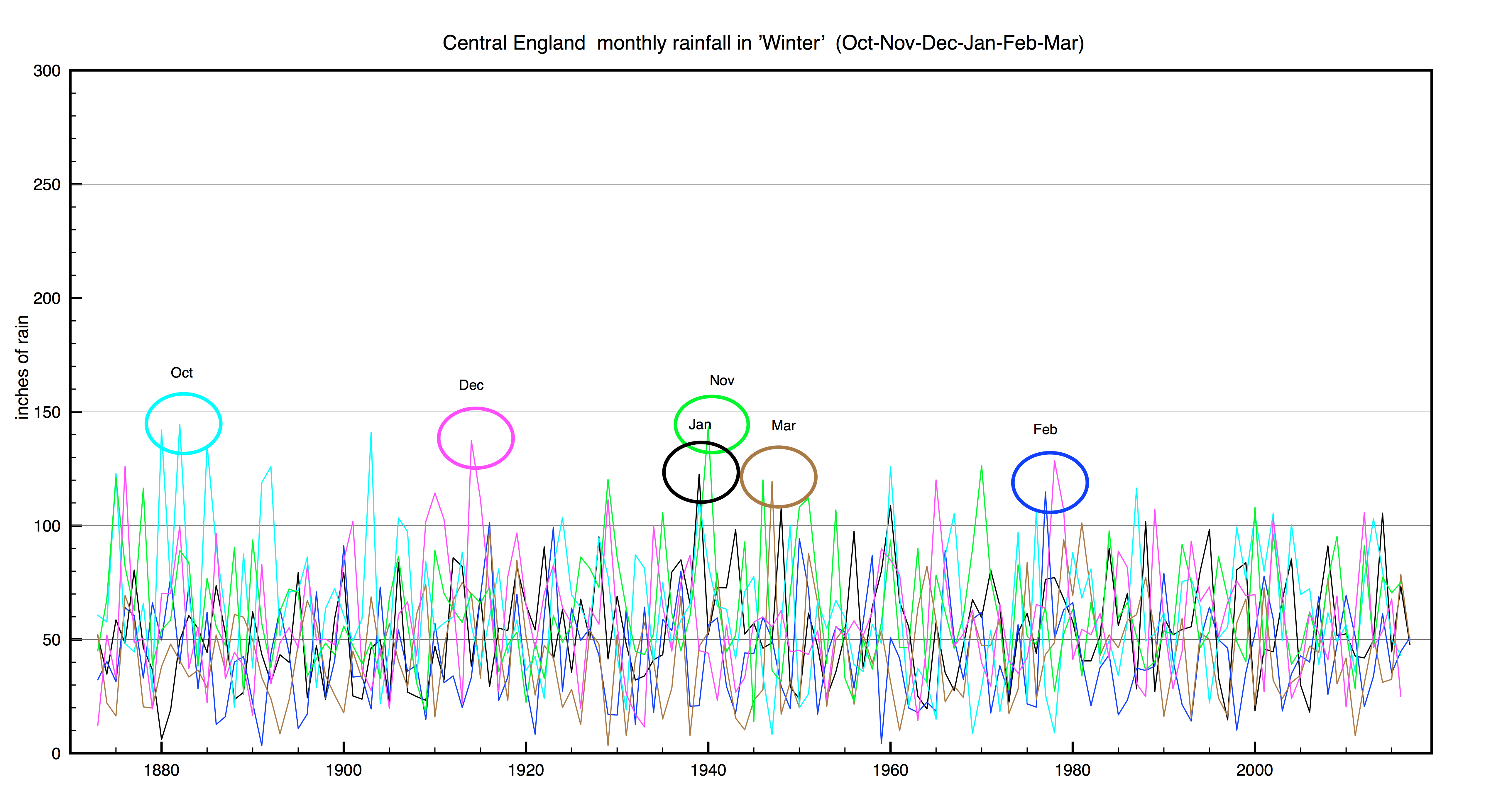 3) Central England. Units are mm of rain ( not inches!) 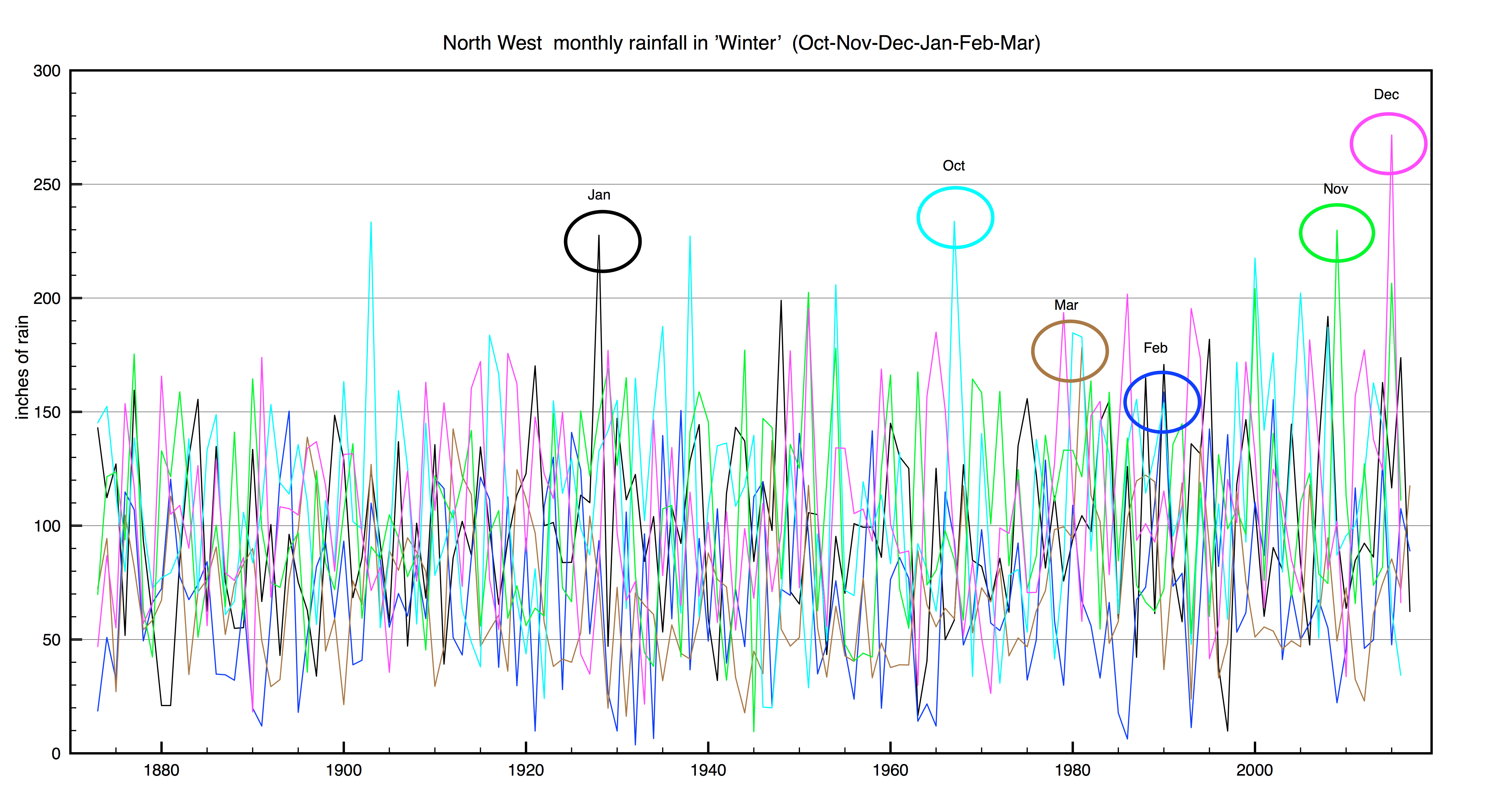 4) North West England. Units are mm of rain ( not inches!) 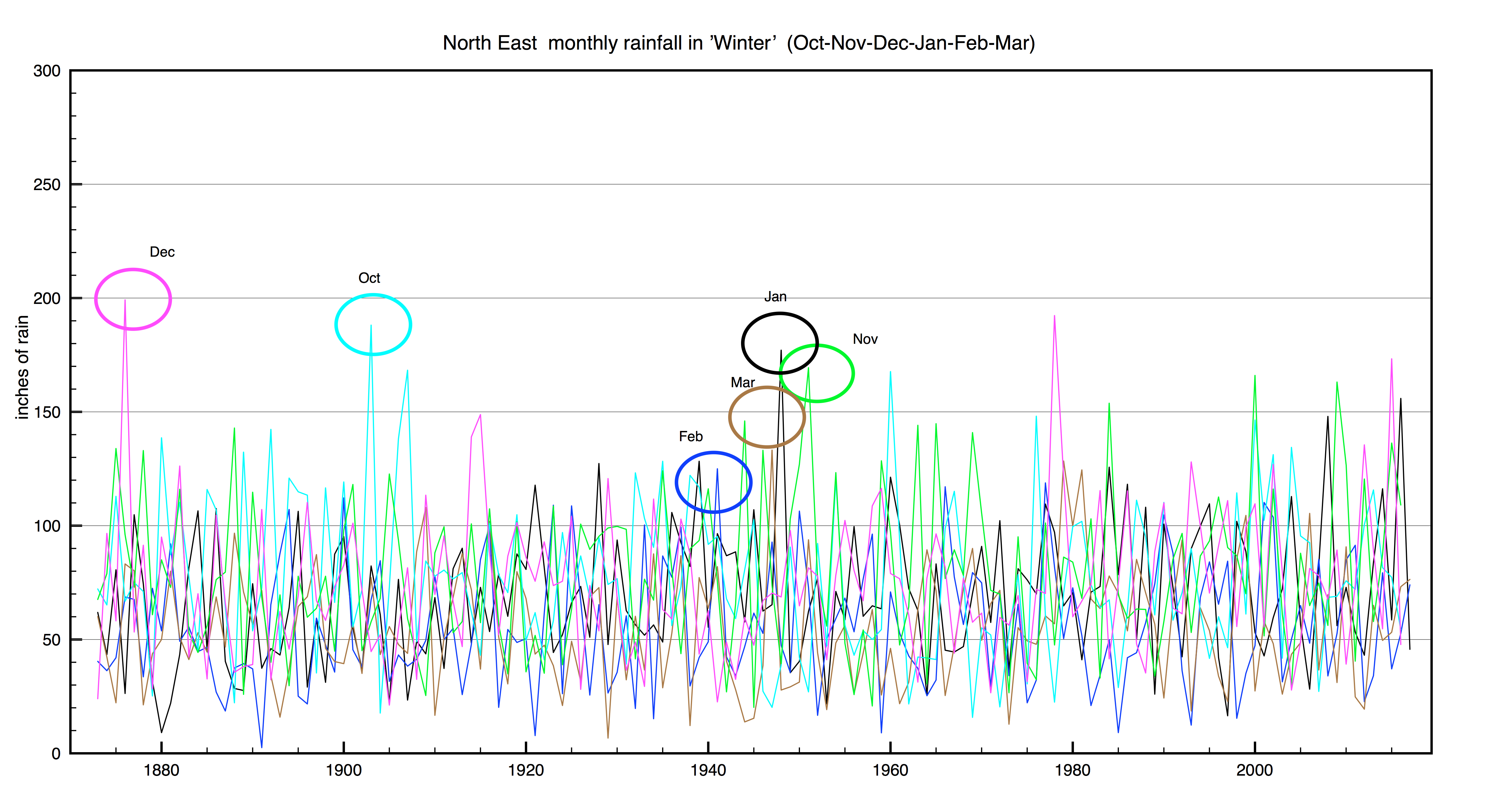 There are no records  at all after 1960 for North East England.

On a purely random basis one would expect 60% (18 records) to occur before 1960 and 40% (12 records) to occur  after 1960. Therefore there is no ‘real life’ evidence to support the hypothesis of any increased risk of ‘unprecedented’ rainfall.

Even AR5 states: “The complexity  of land surface and atmospheric processes limits confidence in regional projections  of  precipitation change, especially over land…”

Perhaps a case of cognitive dissonance ?